Notes on what's coming in Scala 3.

These are the notes for my talk at The Chicago-Area Scala Enthusiasts (CASE), Nov. 19, 2020, and Scala Love in the City, Feb. 13, 2021. Some of these code examples are in my running series of blog posts on Scala 3. Most are adapted from the Code examples for Programming Scala, Third Edition with a few “borrowed” from the Dotty documentation. 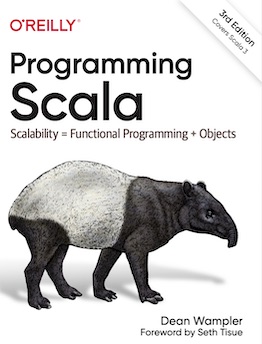 Some features are transitional; you can mix old with new in 3.0, but subsequent releases will start deprecating and warning about deprecated features.

To get started, an EPFL SBT plugin brings Dotty/Scala 3 support to SBT:

You can now use significant indentation (“braceless”), like Python or Haskell, rather than curly braces. You can also mix and match, or use a compiler flag to force one or the other (see below).

But “Custom Controls” Don’t Work (yet…)

There is an experimental compiler flag -Yindent-colons that enables this to work, but there are details to work out before it’s considered fully supported (Scala 3.1??).

There are also new options for control syntax, but whether or not you use them is controlled by compiler flags:

Even Less Use of new

We don’t need to use new when creating instances of case classes, because the compiler generates a companion object with an necessary apply method. For other types, like the abstract Seq type, one or more custom apply methods exist in a companion object, e.g., Seq(1,2,3). In Scala 2, we had to use new for all other kinds of classes, especially those from Java libraries.

Scala 3 extends the case class mechanism to all concrete types, even those from Java and Scala 2 libraries. The compiler creates a synthetic object with an apply method for each constructor. (Note: for companion objects, only the primary constructor gets an apply method automatically).

We begin the migration aware from the implicit mechanism to constructs that more clearly indicate the intent.

Extension Methods Instead of Implicit Conversions.

It’s much simpler and more direct to use an extension method. The following example shows how to define a ~> method on any type A. The @targetName annotation defines the name generated in byte code for the method (but this is only visible to other languages, like Java, not Scala code!).

NOTE: Use alpha instead of targetName for Scala 3.0.0-M1.

Extension methods are part of a new syntax for type classes, which I’ll cover in a moment.

NOTE: If you also defined an arrow2 method, it would collide with the target name given for ~>.

There are still cases where implicit conversions are useful, e.g., allow users to specify Double values that are converted to domain types, like Dollars and Percentage:

Note the new given syntax. This replaces implicit val/def, in general.

Note the name that is synthesized for the first given instance if you don’t explicitly provide a name, given_Conversion_Double_Dollars.

Note that as keyword when the second given instance is named.

By the way, the first definition is shorthand for this:

Even when a given is anonymous, you can use summon[Conversion[Double,Dollars]] to bind to it. The new method summon is identical to implicitly; a new name for a newly-branded concept:

Maybe you already noticed that Conversion looks shockingly similar to A => B.

The syntax combines traits (to define the abstraction), regular and extension methods, and given instances (for type class instances):

Notice which members are extensions and which ones aren’t! The extension methods will be instance members and the others will be the equivalent of companion object members; we only need one unit per type T.

We can actual define the monoid instance for all T for which Numeric[T] exists:

Now we see our first example of a using clause, the successor to an implicit parameter list.

Note that we use summon to retrieve the Numeric[T] object. Here, the anonymous given is less convenient than a named given when we need the unit value.

The definition of the anonymous given may be a little hard to parse. Go back to the previous named definition and just remove the name!

We just saw a using clause. They can be anonymous, too. Here’s an (unnecessary ;) wrapper around Seq for sorting them:

I passed the implicit/given values explicitly to Seq.sortBy for illustration purposes, but of course I could have passed them implicitly (usingly?). The term context parameters (or arguments) is used for these parameters.

Note that the using keyword is now required (although optional in the 3.0 release, to ease the transition). Requiring the keyword when you pass an explicit argument disambiguates which clauses are using clauses and which aren’t. This permits more flexible definitions like the following:

By-name (regular) parameters are great for deferred evaluation, such as passing expressions that should be evaluated inside a method, not before calling the method. This works for context parameters, too, as in this sketch of a database access API:

Consider this example that wraps Futures:

Executable[T] is a type alias for a context function that takes an ExecutionContext and returns a T.

Note the syntax for FutureCF.apply compared to Future.apply, shown in the comment. It’s a simpler syntax than having a using clause, but it can be a bit confusing that a Future(...) is returned, not an Executable.

Notice that we use FutureCF.apply just like Future.apply, either using the given global value or providing it explicitly. So, how do we get the Exetuable[T] returned when the body of FutureCF.apply is just Future(...)?

To allow use of _ for imports, but not pull in all givens when you don’t want them:

In Scala 3.0, _ will still import everything, for backwards compatibility, but Scala 3.1 will begin transitioning to this behavior.

NOTE: “non-givens” should be called takes IMHO… If you grew up with the King James Bible (1611) in your Baptist church like I did, they would be giveth and taketh…

Consider the following definitions, which sort of look similar to our previous definitions of Monoids, but in fact they are different.

Note the definitions the REPL prints for the two givens, a method for the given with a type parameter T and a lazy val for the StringMonoid.

That explains the “Initializing …” messages. Every time we use the <+> method for numeric values, the method NumericMonoid2[T] is called, instantiating a new monoid instance. For StringMonoid, this only happens once, like for other lazy values.

For some type classes, why do we have to write the boilerplate for givens. Can the compiler infer the definition for us? That’s the goal of type class derivation, which Scala 3 supports.

There is a built-in, derivable type class called CanEqual, which is used with a language feature called strict equality to make equality checking more restrictive, causing the compiler to reject obvious false comparisons between objects of different types that can never be equal. Recall that Scala 2 follows Java conventions that equals is declared def equals(other: AnyRef): Boolean (for reference types).

In the following example, we enable the language feature just for this file, then declare an enum for Trees, which derives CanEqual. Finally, we check what’s allowed. Note that attempting to compare instances of Tree[Int] with Tree[String] is rejected at compile time:

See the Dotty documentation for details about how CanEqual is implemented and how to implement your own derivable type classes.

Because people abuse operator notation, Scala is migrating towards disallowing it, by default, unless:

In our previous example:

Note: I had to redefine the previous monoid instances with this new definition to add infix to each concrete definition of combine.

Now combine can be used with infix notation as an alternative to <+>:

I can never remember the Scala 2 syntax for enums. Now I have an even easier syntax to forget!

NOTE: As commented by Seth Tisue during the CASE meeting, Scala 3 uses the Scala 2 library unchanged, so types like Option won’t be changed to enums until some future release.

Value classes still have a few advantages. They are real classes, so you can customize the equals and toString methods for them and you can pattern match on them (although this causes boxing to be required). Opaque type aliases don’t provide these benefits, but they prevent occurrences of boxing. Finally, the JDK will eventually have its own form of value classes (the Valhalla project), in which case a Scala representation will be desirable.

No more ad-hoc extensions of concrete types (unless you want ‘em):

(Wouldn’t make sense for abstract classes and traits, which must be extended to become concrete…)

What if a type isn’t open, but you want to subclass it in a test to stub methods (i.e., make a test double)? Use import scala.language.adhocExtensions in the test file. This is the advantage over declaring the type final, which provides no mechanism for this sort of “exceptional” extension.

blog post (Note: I used different examples in the post than the ones below. The post also goes into more details about algebraic properties of these types.)

Intersection types work much like with for trait mixins:

Note how the argument x for f is declared.

I find it a little confusing, but you have to actually instantiate these types using with:

(The :rs$line$... comes from calling super.toString on the object wrapping the code in the REPL! Just ignore it…)

Linearization is still used to decide which of an overridden method gets called when you use super.method(...). In this example, super.toString returns different results for Resettable & Growable[String] vs. Growable[String] & Resettable, even though those two types are considered equivalent from the type-checking perspective! Note which trait’s toString got called first for each case. (Hint: linearization is basically right to left ordering.)

WARNING: While A & B and B & A are considered equivalent types, the behaviors of overridden methods may be different, due to linearization.

Note how pattern matching is necessary to determine what was returned from getUser. Compared to Either, you give up the useful operations like map, flatMap, etc. as alternatives to pattern matching like this.

This can be a bit “quirky”, but it’s a cool feature. (Example adapted from the Dotty docs):

The last one fails because our match type doesn’t handle nesting beyond one level. This is possible; the type can be recursive!

The book’s code examples use the flag -source 3.1 to force deprecation warnings for older constructs. The default, -source 3.0, is more forgiving.

Other Things of Note…